The first round of substantive negotiations by UN member states on a draft treaty to regulate transnational corporations and other business enterprises in human rights law took place from 15th-19th October 2018 in Geneva. This marks a milestone in the process towards an international legal regime tackling the accountability gap with regard to transnational cases involving human rights violations by business entities. This contribution provides a short overview of the draft and discusses reactions by various stakeholders at the recent session of the UN Human Rights Council’s working group.

Attempts to address corporate accountability have been made at UN level since the 1970s, but so far only produced self-regulation by businesses in the form of voluntary codes of conduct. In 2011, the UN Human Rights Council (UNHRC) endorsed the UN Guiding Principles on Business and Human Rights (UNGPs), establishing the corporate responsibility to respect human rights, but again not stipulating binding rules.

Therefore, a process to negotiate a legally binding instrument on business and human rights was initiated when the UNHRC adopted resolution 26/9 in June 2014, tabled by Ecuador and South Africa. The resolution established an open-ended intergovernmental working group (OEIGWG) with the mandate to elaborate such an instrument. Based on the first two meetings in 2015 and 2016, the Ecuadorian Chair of the OEIGWG presented a paper with possible elements (Elements) as a basis for discussion for the 3rd meeting in October 2017. Members agreed to continue the process, which moved it into a decisive negotiation phase as the Chairperson of OEIGWG presented a first draft (Zero Draft) in July 2018.

The Zero Draft – what does it lay down?

The first draft of a future convention on business and human rights clearly has one of the most pressing issues at its core – ensuring access to effective remedy for those affected by corporate human rights abuses (art. 8) and facilitating mutual legal assistance and international cooperation of states to this end (art. 11 and 12). Thus, the draft establishes the right of victims to present claims individually or collectively (art. 8.2.) also in courts of the state where the company is domiciled (art. 5), hence expanding jurisdiction to extraterritorial abuses.

It also tries to eliminate further hurdles in access to remedy as states would commit under the Convention to guarantee access to relevant information (art. 8.4), reverse the burden of proof where needed (art. 10.4.), waive court costs where necessary (art. 8.6.) and provide legal assistance (art. 8.5).

Art. 10 of the draft obliges states to hold businesses accountable under domestic law for human rights violations in the context of their transnational activities. Besides civil and administrative liability, the draft opens the possibility for states to establish criminal liability for corporations along the value chain – which is of special relevance for states whose domestic law does not entail criminal liability of legal persons (like Germany).

The Zero draft choses the form of a framework convention with a Conference of States Parties (art. 14) to facilitate negotiations and envisions the creation of a treaty body for its supervision, which is vested with the competence to receive complaints in an Optional Protocol.

… and what was dropped from the Elements document

Unlike the Elements, the Zero Draft no longer stipulates direct obligations for businesses. This was one of the most controversial topics so far as corporations are not considered subjects of public international law. Instead, the draft mandates contracting states to require companies to conduct human rights due diligence (art. 9). The Elements of due diligence mentioned therein are largely similar to the requirements of the UNGPs, although they further specify some aspects and depart from the four-step process as concerns the establishment internal complaints mechanisms.

Furthermore, the relation between investment law and human rights law is addressed with much more caution compared to the Elements, as the recognition of the primacy of human rights obligations over those stemming from trade and investment agreements has been waived. Instead, in art. 13 the draft simply stipulates that future trade and investment agreements should not contradict the implementation of the Convention and existing agreements should be interpreted in a way least restrictive to the obligations under the Convention.

Additionally, the notion of an International Court on Transnational Corporations and Human Rights as an enforcement mechanism for the treaty disappeared.

Since the release of the draft, comments have been made by civil society organizations, scholars and legal experts, law firms, business organizations, and national human rights institutions. Many of them considered the draft a good starting point and suggested improvements, most of which were also discussed at the 4th session of the OEIGWG.

Some legal experts criticized that businesses are not directly bound by the provisions of the treaty, while business organizations fear that direct obligations could still be deducted from the preamble. Yet, the option of indirect obligations in the draft is a pragmatic solution to convene those reluctant to the process and achieve a higher ratification of the Convention.

As civil society organizations and some states rightly noted, the opportunity to provide legal certainty in situations of conflict between human rights and investment law through the establishment of clear conflict rules in favor of human rights (as already recognized in principle 9 of the UNGPs) is unfortunately missed in the draft.

Hot topics at the 4th session: inclusion of local businesses, missing reference to human rights defenders and the need for a better gender perspective

At the session held in October 2018, 94 states negotiated the provisions of the first draft, marking a milestone in the process of the elaboration of a Convention on Business and Human Rights. The record number of over 200 registered civil society representatives highlights how important this process is to victims of corporate human rights abuses. They actively participated in the process and made valuable contributions. Many of them were disappointed by the lack of constructive engagement by the EU and its member states – with the exception of France, Belgium and Spain, who took the floor.

One of the most problematic aspects discussed was the limitation of the scope of application (ratione personae) to “business activities of a transnational character” (art. 3). The reason for the exclusion of local businesses is a footnote to a preambular paragraph of resolution 26/9 and has been a controversial matter since the start of the process. This narrow scope raises serious legal problems and would put those negatively impacted by activities of purely local businesses in a worse position. Therefore, many states, NGOs and even business organizations demanded all companies to be covered by a future instrument.

Further, the draft was criticized for falling short of explicitly demanding effective protection for human rights defenders and other at-risk populations, such as indigenous peoples.

There are many gender-related issues with regard to corporate human rights violations such as gender-based discrimination in the labor-force, sexual harassment and abuse in the workplace (as research on working conditions at tomato and strawberry fields in Spain, Italy and Morocco recently showed), and gender-based and sexual violence where corporate activities are militarized or protected by public or private security forces. Therefore “Feminists for a Binding Treaty” amongst others called for a greater structural integration of a gender perspective into the treaty and the elaboration on measures to address gender-specific risks.

The failure to specify which substantive human rights are covered by the treaty (ratione materiae) was also raised, as the draft currently only refers to “all human rights” (art. 3).

Looking forward: what next?

As the recommendations of the Chair and conclusions of the working group were adopted on 19th October, the way is paved for a revised draft to be presented by the end of June 2019 and further substantive negotiations at the 5th session in October 2019. 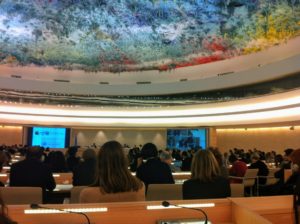 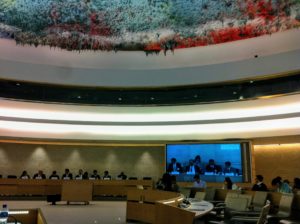