In the 1980s, legal scientist Catherine MacKinnon agitated many people when she equated sexuality with sexual violence. Sexuality was the form and content of male power. While even feminists found her views too extreme and took their distance from MacKinnon, MacKinnon’s criticism on male power structures is still relevant today. To show its contemporary relevance, I will use a widely discussed case from the Netherlands, concerning a woman urinating in public and the judge’s response to her arguments.

Gendered toilet facilites: the facts of the Geerte Piening case

In May 2015, a 21-year old woman named Geerte Piening went out in the Dutch capital of Amsterdam. It is important to know that public urination is not allowed in Amsterdam, on the basis of the general municipal ordinance (APV) 2008, article 5.11. Lastly, it is important for this case that there are 565 public toilets available at night throughout the Netherlands, of which 204 are urinals: these are unsuitable for women (however, all public toilets can be used by men).

When Ms Piening decided to go home, she went outside, only to become aware of her full bladder after stepping outside. No public toilet suitable for women was nearby (35 public toilets for men were nearby though), so she decided to urinate in an alley. Police agents caught her in flagrante delicto, and fined her for 147 euros. She appealed: on the grounds that she had no other option, as there were no public toilets for women nearby. With this appeal, she also wanted to as attention for the gender inequality in public toilet options.

Unsurprisingly, the judge did sentence Piening to pay the fine. What was surprising, was the reasoning of the judge. He said that “In my whole career, I only encountered one woman in a case like this”, and that therefore there was no need for more public urination facilities for women. Men, on the other hand, often urinate in public places, therefore public urinals for men are more necessary. If Piening had no other option, she could also have gone to the urinal for men, a ‘plaskrul’. However, it is very uncomfortable for women to use these, because they would have to display public nudity. 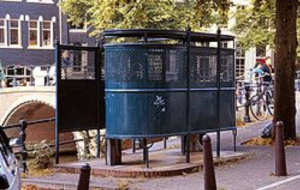 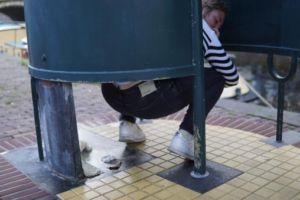 Figure 2: inability of women to use the urinal without showing nudity

MacKinnon argues that in the current liberal society, gender is not seen as an epistemology, but as an ontology: not as a social construct, but as a natural given. The law is crucial in this conversion of perspective into being. Every action of the state must be grounded in the law. This is exactly the role that law plays in liberal societies: it legitimizes power, which is possible because of its assumed objectivity.

However, we must not forget that it is also the state who produces the law. In 2018, it is safe to say that we still live in a male-dominated society, just as in the 1980s. Of the Dutch parliament, only 35% is female. Only 10 out of the 24 members are government are women. In this context, the male standpoint dominates civil society, transforming this standpoint in the objective standard. And as this standpoint is seen as the objective standard, it no longer functions as a standpoint. The male standpoint is adopted by the state in and as the law, through which the law becomes legitimate, and the social dominance becomes invisible: it has become legal objectivity. As such, male dominance is seen as a normal feature of life, and the male perspective becomes objective reality. The law is seen as objective, principled, “the way things are”, while it is actually a construct exerting male power over the rest of society.

Towards a female epistemology of social inequality and the law

MacKinnon comes to the conclusion that inequality is power – it is not a matter of being the same or different. It is a matter of dominance and subordination. Men have the power to determine reality, when the male epistemology becomes objective ontology: in this ontology, inequality is sameness and difference. MacKinnon holds that we have to attempt to reverse this process, because then gender changes from something ontological and objective to something epistemological and challengeable.

Then, how should we do this? MacKinnon’s answer is that we have to challenge the dominant, male ontology with a dissident reality: then it becomes visible as epistemological. Consciousness needs to be raised for the political to be seen behind the ‘objective’ law. Therefore, the female epistemology of social inequality based on sex needs to confront the male ontology. At first, women need to face their situation and name it, they need to claim women’s concrete reality. With every situation, the following question needs to be asked: does this practice participate in the subordination of women to men? Opposition is expected, and the state will participate in this opposition, because when the state holds that it acts in the most neutral way, it is most male; “when it is most sex blind, it is most blind to the sex of the standard being applied.” (MacKinnon, p.248)

Feminist jurisprudence and the case of Geerte Piening

Piening does exactly what MacKinnon explains is necessary to destabilise the male ontology: she offers her experiences to a judge, who is part of the state. Piening names the situation of toilet-access-inequality – maybe not such a serious matter as prostitution or violence, but still an expression of the gender inequality in Dutch society – she claims women’s concrete reality. Does this practice participate in the subordination of women to men? You can develop numerous arguments to support this: women can decide to go out less because of the lack of facilities; when they use a ‘plaskrul’ as suggested by the judge, they must show nudity which can cause humility or insults; female public urination remains an unaccepted practice. The mere fact that there are more public facilities for men than for women is clear sexism: it is not the case that women need to urinate less, therefore there is no good argument accessible to the state to defend their breach of the duty to care for their citizens, irrespective of gender.

The response of the judge (who was a man) shows to what extent the state acts from a male ontology. First of all, the experience of women is negated by the judge and replaced by his own subjective assesment: he has only heard once from a similar case, so Ms Piening must be unique/ abnormal/ an exception. Because he is not familiar with the problem, it must not exist. Female discomfort when using this urinal does not come to his mind. In suggesting this, the judge, as part of the state, is convinced that he applies a neutral standard, while he is blind to the sex of the standard applied: women can’t pee in urinals.

The male standpoint in the law and in the state becomes very apparent in Ms Piening’s case, as the state has overwhelmingly provided male public facilities, and the judge does not even recognize these female issues as a problem. Piening seems to follow MacKinnon’s advice by challenging the male narrative and pointing out the female situation. Hopefully, more of these actions will eventually lead to a destabilised ontology, unmasked as an epistemology which we can alter. In this way, MacKinnon’s critique is still relevant in 2018.

Nanne van Doorn is a bachelor student following the bachelor Liberal Arts and Sciences with a major in International Relations and Politics, and a bachelor in law at the Erasmus University Rotterdam, the Netherlands.