On 29 August 2016, the court (Landgericht) in Dortmund, Germany, issued an important decision: In a claim by Pakistani survivors and legal heirs against German retailer KiK for injuries and deaths during a fire at a factory supplying jeans in Karachi, the judges accepted jurisdiction and granted legal aid to the Pakistani claimants to cover the legal fees. While at the very same time the German National Action Plan on business and human rights turns out to be less about binding obligations than about voluntary responsibility, this judicial decision is a first step towards accountability for transnational human rights violations by German companies abroad. It is the first time that a transnational claim by workers and their families from a supplying factory against a retailer will be heard in Germany. 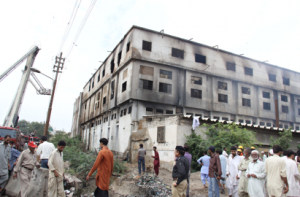 Next steps in the legal proceedings

The court will still need to decide the merits of the case: whether KiK is liable for the lack of adequate fire safety measures due to which 259 workers died and 55 were injured in a fire at the factory Ali Enterprises in September 2012. In their defense, KiK representatives say: „If you are a customer at a bakery and buy a piece of bread there, you are not responsible if a day later the bakery burns down.”[1] In its decision, the court already recognized that the case is more complex than KiK’s simple analogy would suggest, and it requested an expert opinion to assess this question of liability.

Instead of buying a bread roll, according to its own audit reports, retailer KiK placed orders constantly. Starting in 2007, KiK’s orders comprised at least 65-75% of the factory’s production volume, subject to a Code of Conduct signed by the owners of the Ali Enterprises factory. The general terms and conditions of the clothing orders rest upon the Code of Conduct, which is described as the “basis for the working relationship.” According to this document, which includes a provision on fire safety, its violation by a supplier can even lead to termination of business. 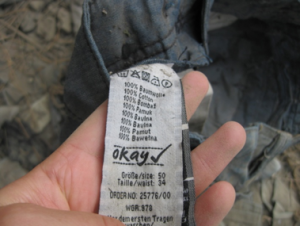 In accordance with the EU Regulation (“Rome II”) on the applicable law in transnational tort claims, the question of liability will be decided on the basis of Pakistani law. Therefore, in its order, the Dortmund court called for an independent expert opinion on Pakistani law, to be appointed in October 2016.

Legal developments in the context of economic globalization

Before 1900, employers were generally not held responsible for injuries to their employees. According to legal sociologists Hoekema and Van Manen, workers led the push for a new legal understanding by bringing lawsuits against their employers. While the claims were unsuccessful, the workers managed to put the issue on the political agenda. One of the first countries in Europe to do so, in 1884 Germany enacted new legislation recognizing employers’ liability for injuries occurring in the course of employment. Insurance paid for by the employer guaranteed compensation. Soon other European countries followed suit. The significance of these laws lies in the shift from fault-based liability towards risk-based obligations. Today, changes in the globalized textile industry — with widespread outsourcing and offshoring — again warrant shifts in the understanding of liability and its basis. 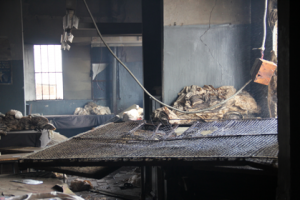 Similar to the impact of the legal cases brought by 19th century workers against their employers, the legal claim against retailer KiK is already making waves in the industry and becoming a reference point in political and academic debate. Called a “game changer”, it has become a point of reference for compliance officers. Systemic change may already be underway. For example, in early 2016, the German newspaper Süddeutsche Zeitung reported that KiK had initiated changes in its auditing commissioning practices.

Bringing the question of supply chain liability before courts logically follows from three legal developments. First, imposing liability on a company for harms in the supply chain fits a trend of previous tort cases recognizing the possibility of parent liability. In the United Kingdom, Chandler v Cape plc has established that under certain conditions, a parent company can be liable for harms that occurred at the site of its subsidiary. Moreover, it has been established that such liability is also possible in transnational constellations.

Second, the question of legal responsibility along the supply chain fits a growing recognition that we must look beyond traditional principles in company law. For example, EU competition case law has developed the concept of “economic entities.” On the basis of this doctrine, parent companies can be held liable for the conduct of their subsidiaries, when they can be considered to form a “single undertaking”.

Third, multilateral declarations have paved the way for recognizing the responsibility of business enterprises along their supply chains, such as the latest update of the OECD Guidelines for Multinational Enterprises (2011) and the endorsement of the United Nations Guiding Principles on Business and Human Rights in that same year. For example, the responsibility to undertake due diligence to “identify, prevent, and mitigate” potential adverse impacts also applies to entities along the supply chain.

Shortly after the significant decision in Germany, in separate negotiations, an agreement was reached in which KiK committed to pay 5.15 million USD to those affected by the factory fire at Ali Enterprises. The agreement was signed on 9 September and was the result of talks enabled by the International Labour Organization (ILO) with the German retailer KiK, IndustriALL Global Union and the Clean Clothes Campaign, on request of both the German and Pakistani government. The claimants welcomed the promised compensation for all the survivors and affected families. 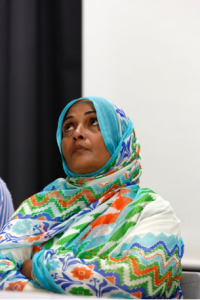 Notwithstanding this first and significant victory, the legal claim filed in Dortmund against KiK continues. The promised upcoming payment by KiK is voluntary. Dependence on the goodwill of companies, however, gives no guarantees for future workers. The claimants are part of the Ali Enterprises Factory Fire Affectees Association. They have always sought more than financial compensation: They are demanding justice and hope that the lawsuit will contribute to better working conditions in the future. Saeeda Khatoon, who lost her son in the factory fire and is now senior vice-president of the Affectees Association, said: “I will not give up this struggle till my last breath.”

Where voluntary commitments have failed, recognizing retailers’ liability for harms occurring in their supply chains can provide the necessary incentive to ensure that safety measures are in place. The legal claim asks for the symbolic payment of damages for pain and suffering, which are not covered by the ILO agreement.

Due to procedural and budget limitations (e.g. lack of group claims), Ms. Khatoon and three other claimants were chosen by the Affectees Association to file this claim on behalf of all their members. During the process of preparing and filing the claim, the claimants and the Affectees Association have already moved from passive objects of charity into acting legal subjects. Today they are speaking for themselves, asserting their decisions, and articulating their rights and own assessment of their needs. They are doing nothing less than pushing for a legal recognition of their role in globalized supply chains.

The author is legal advisor in the Business and Human Rights Program at ECCHR which supports the claim with its legal expertise. She has travelled several times to Pakistan and worked in close contact with the claimants and their Association to prepare the lawsuit.